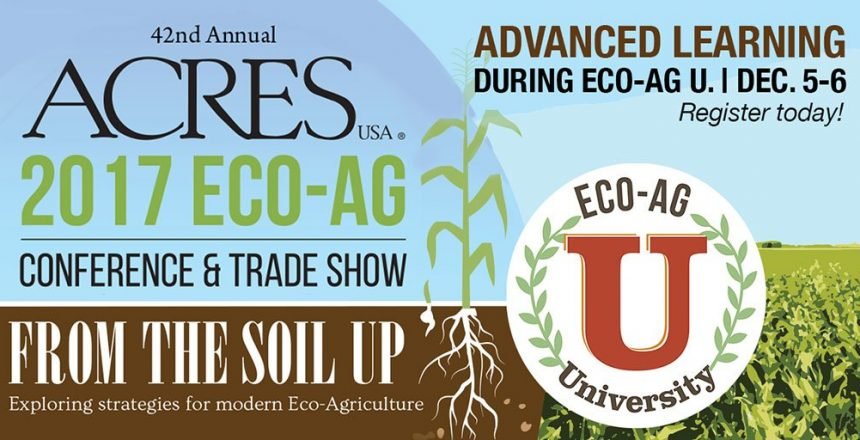 “Sustainable is no longer a sufficient buzzword, now it’s Regenerative.” That paraphrased sentence could be the summary of the entire conference. We’ll explain why.

There were two clear themes at the Acres 2017 Eco-Ag conference in Columbus OH this year, the first we’ve already mentioned in the opening lines, the second was the theme the conference advertised: “From the soil up.”

Frankly speaking, there were less sessions that caught my attention this year than in previous years. It had been three years since my last Acres USA conference (it was in Columbus then too). However, there were three sessions that I really found genuinely interesting.

Andre Leu gave an excellent lecture on the Alternatives to using pesticides. The first alternative is to get your soil right. Pests and disease attack the weak first, and if the soil is healthy it removes the first tier dangers.

The second is to develop an ecosystem that prevents disease and pests altogether. Mr. Leu gave the example that a parking garage has a limited number of spaces, and when those spaces are full, cars have to go somewhere else to park. It’s the same with pests and diseases on the farm. If your farm ecology is full of helpful bugs and microbes, there isn’t any space for the disease to park.

Neal Kinsey presented this topic covering how to create robust crops that can withstand the hardships and variations of the ever changing weather. Can you guess what the cure it? If you thought, “Good soil.” You were right.

If your soil has the proper balance of nutrients it’s going to keep the plant healthier, regardless of pouring rain or dry spells.

Regenerative Organic Standard: A Framework For The Future – Jeff Moyer

Jeff Moyer is the executive director of the Rhodale Institute, which has done a great deal of research on no-till practices, and has taken the lead in forming the Organic Farmers Association. Their latest project is the creation of a new standard the builds on the current National Organic Program: Regenerative Organic Certification.

As an Organic inspector I thought this was one of the more important sessions I attended, and it didn’t disappoint.

To give some background, the term “Regenerative Organic Farming” is actually from Robert Rhodale, son of J.R. Rhodale who founded the Institute. Consequently, they have a historical connection to the term.

This new certification standards build on the foundation of the Organic standards (ie. farms must be Certified Organic, before they could be Certified Regenerative Organic), with the addition of three pillars:

These additions are designed with the idea of compensating the areas where current Organic Certification is lax or silent (such as social fairness). And it sounds great in theory, however there is a great deal of unanswered questions as to the practical implications of such a program.

In this session, Jeff Moyer explained the general idea and background of these Regenerative Principles and why they are needed. Encouraging the audience to give feedback and ideas on what is still an idea in development.

The stand out from that session was that as the sustainable buzzword is losing momentum in the marketplace, we’re going to start seeing more regenerative used more often. It’s one of the reasons Rhodale is pushing this so early is an attempt to get ahead of the curve.

It’s important to keep in mind that the soil is the foundation of agriculture. Without good dirt it’s hard to have good farmers. Regenerative is buzzword that has already caught on in Europe, but whether it has enough worth to become a certification of it’s own is too soon to say.